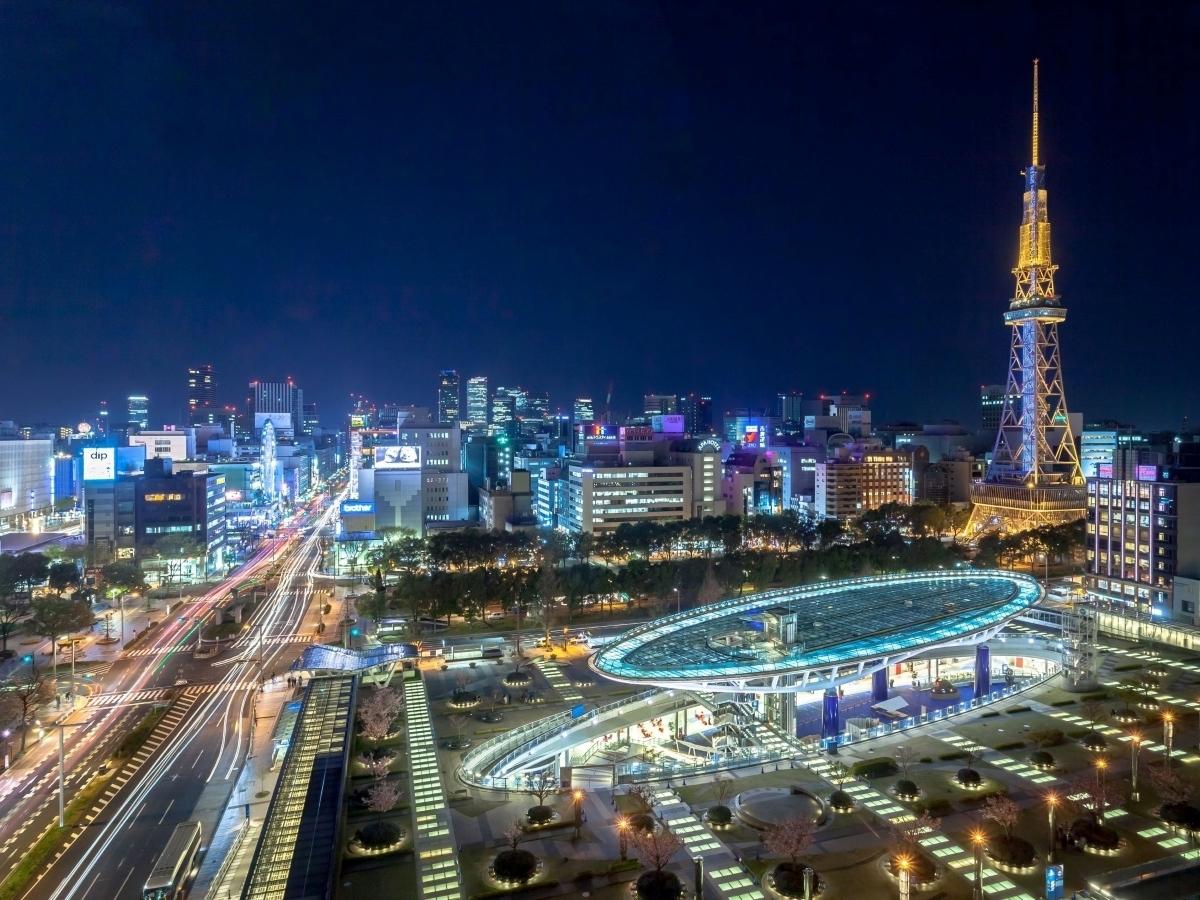 For many years the powers that be painted Nagoya in a somewhat unfavorable light. Nagoya was portrayed simply as an industrial region, bereft of much of beauty or interest. While it is true that the art of manufacturing was perfected in Nagoya and Aichi Prefecture, and as such, has become the financially strongest region in Japan, it also provides a wide range of scenes unknown to the average tourist, and therefore ideal for photographers!
Beauty is in the eye of the beholder, and a skilled photographer can make the most mundane of scenes into a spectacular work of art. Test yourself at the following suggested photogenic spots.

Situated between Nagoya’s iconic TV Tower, the huge NHK building and the Aichi Arts Center, the landmark Oasis 21 venue is one of Nagoya’s most popular sightseeing spots, shopping venues, eating areas and event stages. The complex’s most notable feature is the 14m high glass and steel-pipe architectural wonder supporting a large dish containing 15 tons of water and looking like something out of Star Trek. Located directly under the huge oval shaped dish are over 30 specialty shops and restaurants surrounding the underground “Galaxy Platform” events space. At night, the Oasis 21 site is lit up in an ever-changing colorful rainbow of light. The venue received a surge of interest in August of 2017 at the time of the World Cosplay Championship being held in the area, enough to rank it in the World Top 3 Photogenic Spots on a popular social media photographic site.

Close by is another iconic Nagoya sight, the 180m high TV Tower. Built in 1954 and the oldest broadcast tower in Japan, TV Tower was said to have been inspired by the Eiffel Tower. Although its 57-year role as a communications tower ended in July 2011 with the phasing out of analogue TV broadcasts across Japan, Nagoya City, in recognizing its iconic and historical value, has considered some innovative uses of the tower and are striving to maintain it as a symbol of Nagoya. Chubu Electric Power MIRAI TOWER has since been designated a Nationally Registered Tangible Cultural Property. Its iconic status and high visibility ensures that there is always a camera pointed in its direction.

The skylines of many a Japanese city have often featured Ferris Wheels. Japanese department store giant, Mitsukoshi has long had a fun park on the roof of their various stores to attract and entertain the children of its customers. Naturally, the Nagoya City central Sakae Mitsukoshi was one of those stores. Ferris Wheels, merry-go-rounds, slow dodgem cars and rideable motorized animals were a staple of these fair-like rooftop attractions. For the children of the 70’s and early 80’s this was different, this was exciting and fun. Times have changed, and the numbers of customers excited about such rides have dwindled, however the various attractions remain. In particular, the sight of the small but colorful Ferris Wheel poking above the building tops is one such sight that seems to interest photographers from Japan and around the world, seeking to capture these symbols of a time slipping by.
Japanese architecture often incorporates a playful creativity seen nowhere else in the world. Right in the heart of Nagoya City is the “Sky Boat”, a 42-meter diameter Ferris Wheel with 28 glass gondolas mounted on the street side of a large city central shopping and entertainment complex. The main focus of the Sunshine Sakae building is the huge Ferris Wheel which takes about 15 minutes to go full circle. Day and night people gaze in wonder,…mostly wondering why there is a Ferris Wheel on the side of a city central building, …but at least they’re looking. For riders at night, the view is romantic, for onlookers the view is spectacular!

When completed in 1615, Nagoya Castle’s magnificent Hommaru Goten Palace was considered a masterpiece of Shoin-zukuri samurai residential architecture. Externally and internally the palace is a sight to behold. Richly decorated with pure gold covered walls and screens further adorned with stunning art works by the leading artists of the day, it was the most elegant, most gorgeous castle palace of all. Along with Nagoya’s tower keeps and other surviving structures it became Japan’s first National Treasure designated castle, before being destroyed by wartime air raids just months before the end of WW2.

Using only traditional Japanese artists and craftsmen, techniques and materials, the Hommaru Goten Palace has not been replicated, but 100% authentically rebuilt. Such quality craftsmanship and artistic elegance can be seen nowhere else in Japan, and the power, the authority of the ruling Tokugawa clan is most evident in the architecture and the glorious artworks. The wonderful news is that photography is allowed inside the palace, although they do ask you not to use a flash.

Another iconic Nagoya City central building is the Nagoya City Science Museum, resembling the Death Star from Star Wars seemingly hovering above the treetops of the city’s southern Shirakawa Park. The huge silver sphere is in fact the exterior of the world’s biggest planetarium, the 35m diameter NTP Planet. The view looking southwards along Nagoya’s Chojamachi Dori street, with the city’s buildings forming a canyon on either side of the road, and at the far end, ready to roll like a giant silver pinball game, the Nagoya City Science Museum’s planetarium has to be seen to be believed.

As with most Japanese garden designs, various elements are representative of nature and the geography of the surrounding area. The garden’s main pond, for example, represents the waters of Ise Bay, the southwestern corner hill serves as volcanic Mt. Ontake, while the stream originating from the hill reproduces the mighty Kiso River.

The gardens are laid out around the tidal lake, with exquisite grouping of traditional tea rooms known as the Seiu-tei at the center, designed in the image of a graceful white swan, hence the name, Shirotori, or white bird.

Walking paths wind around the lakes taking you across quaint wooden arched bridges, past little waterfalls and rocks and through sections of forest. Everything is so calming, so gentle, and so photogenic.

Cherry blossom and the new leaves of spring are a welcome sight. The colorful summer scenes offer yet another view of the grounds, while in autumn the trees are ablaze with red, orange and golden yellow leaves, and the reflections in the clear waters doubles the enjoyment. In the winter, the larger tree trunks are wrapped in woven rice straw, and ropes set out in a tent-like pattern from the tree tops to the ground, a typically Japanese winter scene for you to snap.

The tranquil gardens are often host to a number of popular events, including the annual Plum Tree Bonsai Exhibition, the Concert Under The Moon in late September and October, tea ceremonies, classical Japanese concerts and other cultural events are held. Each season and each event provides a chance for the photographer to capture the essence of Japan.

Another idyllic Japanese garden is the Tokugawaen Gardens, originally constructed in 1695 as part of the retirement home for the Second Lord of Owari Tokugawa Mitsutomo. The grounds once covered some 44 hectares and were said to have been the greatest gardens of their day. Unfortunately, the elegant gardens and extensive living quarters were destroyed in the air raids of WWII, but were replaced by the wonderful Tokugawa Art Museum, and the beautiful, painstakingly restored Tokugawaen Gardens. Entry is via the original Kuro-Mon, the Black Gate, which escaped wartime destruction.

Like many Japanese gardens the focal point is the colorful carp-filled wide central lake surrounded by huge stone monoliths and earthen mounds, representing landscapes of oceans, and mountains. Black pine, plum and peach, maple, oaks and cherry forests, seasonal plants, including irises and peonies, waterfalls, stone lanterns and bridges add to the picturesque and tranquil atmosphere, ideal for photography.

Nagoya Port’s Kinjo Wharf Station and the Kinjo Wharf Ryokuchi Park are perfect locations for views of the various factories, refineries and production plants around the port and of the tall container cranes along the docks. The Meiko Nishi Ohashi Roadway Bridge, known locally as the Meiko Toriton Bridge, is also a stunning site, with its bright red twin A-frames supporting the bridge slung below with cable stays. Illuminated at night, it makes for a rewarding photo subject.

Kinjo Wharf Ryokuchi Park faces the sea. Here popular facilities such as the colorful Legoland Japan and the SC Maglev and Railway Park museum buildings are located. It is a well-known photographic spot for night views of the area’s factories and industrial facilities too. For the best night shots, the parking lot near Meiko Shiomi Interchange, and the area under the Meiko Toriton Bridge is recommended. Both spots give you a clear view across the bay, and with the right skills and equipment, a stunning photo op.

The photogenic Ferris Wheel and old styled merry-go-round are often chosen subjects for photo competitions. Both are illuminated at night, and the Ferris Wheel in particular puts on a colorful and enjoyable light show. The surrounding Nagoya Port Aquarium, Nagoya Port Building, Nagoya Maritime Museum, Antarctica Observation Ship Fuji, even the restaurant and shop complex JETTY are well lit at night making a romantic and captivating scene. The towering 53m high Nagoya Port Building observation deck is often open late into the evenings on special occasions and during events, offering views of the entire Nagoya Port Garden Wharf area, the distant bridges, well-lit factories and to the north, the lights of Nagoya City too.

Discover the diverse sights and scenes around Nagoya City and the surrounding districts, the kind of views of modern and traditional Japan that passionate photographers long for. Despite the city’s unfounded reputation for being dull, far from it, you’ll find it’s as pretty as a picture!