Retro Photo Trip Around Nagoya on the Me~guru Bus 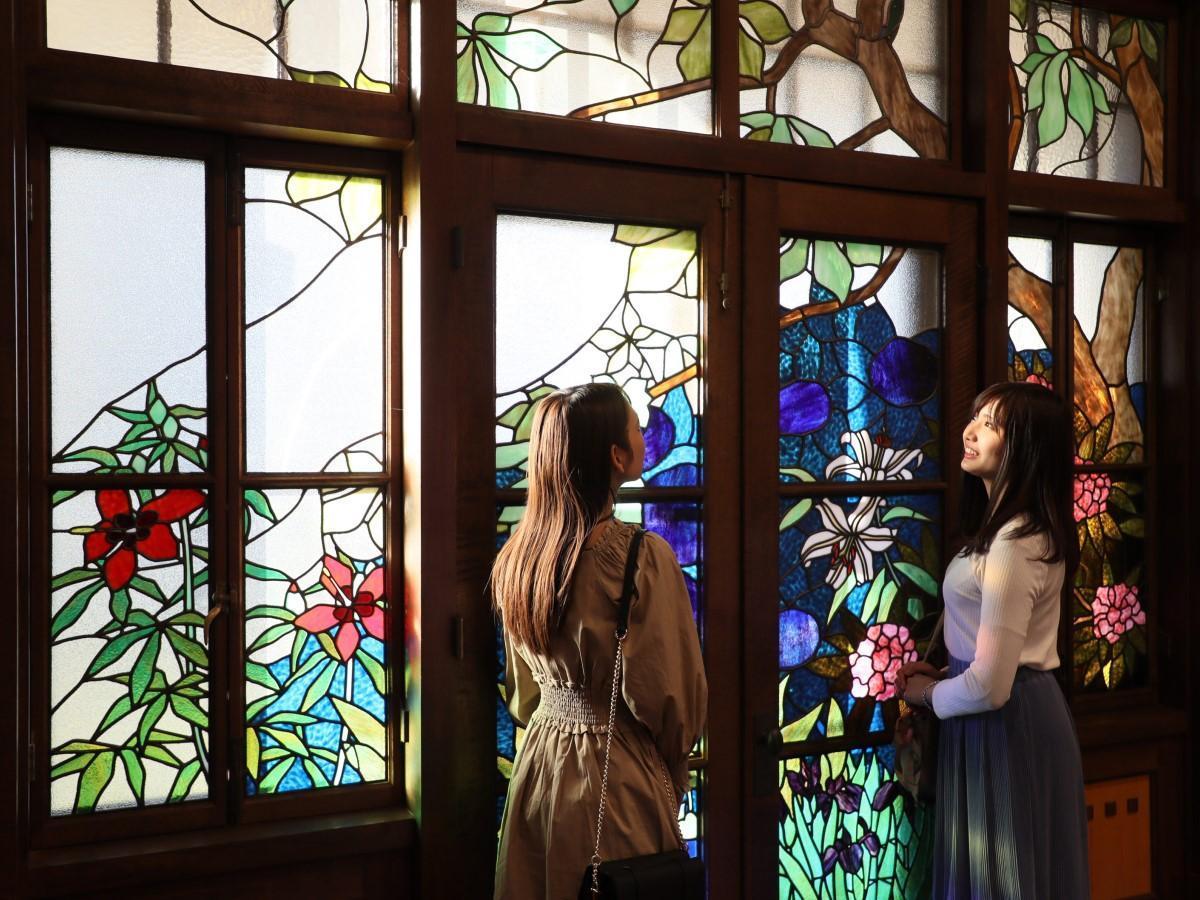 Nagoya is full of retro buildings that have been used as filming locations. Taking the Nagoya Sightseeing Route Bus Me~guru is a highly recommended way to efficiently travel around to these places. Head out on a photo trip and experience Taisho Romanticism.

Completed in 1933, Nagoya Shiyakusho has miniature shachi statues perched on the rooftop, reminiscent of the pair of golden shachi on the main tower of Nagoya Castle. The Western-style building construction of this monumental City Hall building includes Japanese components, and the construction of the inner hallways and staircases are also lavishly designed.

Nearby is another famous building from the Showa era, registered along with Nagoya Shikyakusho (City Hall) Main Building as a tangible cultural property. The Aichi Prefectural Office leaves a strong impression with its terracotta tile walls, tiled roof, and gabled turret that resembles the roof of a Japanese castle in what is known as Imperial Crown Style.

This impressive building with its orange roof is the former home of Sadayakko Kawakami, Japan's first actress, and Momosuke Fukuzawa, nicknamed the "king of electric power." In charge of the design was the residential specialist Amerikaya, known for their revolutionary designs. Splendid stained-glass windows decorate the grand parlor used as a reception room, creating an elegant space. Inside the building are posters of Sadayakko drawn by a German artist, clothing replicas, and a sketch of Sadayakko by Picasso. Documents related to Sadayakko Kawakami and regional literature materials are also on display.

The red spiral staircase makes for a wonderful commemorative photo. It's easy to imagine the elegant sight of Sadayakko slowly walking down the stairs to greet her guests. The beautifully streamlined shape of the stairs means you can also take good shots from above. Of the five strategically placed lanterns, one on the second floor is an original from the time period. Try capturing the glow of the real thing! If you are looking to take seasonal photos, a shot of the Futaba Museum against the cherry blossom trees that bloom along the avenue in late March is also recommended.

This was the home of Sasuke Toyoda, who worked as the President of Toyoda Boshoku (Toyoda Spinning and Weaving Co., Ltd.) and was the younger brother to Sakichi Toyoda, known as the "king of invention." Of the noted Toyoda family houses that existed in the neighborhood, only the Sasuke Residence remains. The white-tiled Western exterior with the spacious layout of a Japanese building was constructed with large hallways, stairways, and entrances befitting of a Taisho era industrialist. One of the first to include a flush toilet, telephone, and earthquake-resistant construction, the building demonstrates Sasuke's aesthetic sense and foresight.

The western-style parlor welcomes visitors with appropriate grandeur, but pay special attention to the air vents in the corners of the ceiling. Hidden within the crane and tortoise motif is the word "Toyoda." In addition, the pine design on the sliding screens depicts a young pine on the first floor and a magnificent, full-grown pine on the second floor. These and other fun little details can be casually observed here and there, adding to an appreciation of the tasteful design.

A successful ceramics merchant, Tetsujiro Haruta's former residence currently houses the French restaurant Dubonnet in the Western-style room on the first floor. The building design was the work of representative Japanese architect Goichi Takeda. In a demonstration of Takeda's abilities, the Western-style front of the building and the Japanese-style composition in back work together seamlessly to produce a new, blended style.

Goichi Takeda carefully oversaw every aspect of the design down to the last detail, whether it was the construction of the furniture, the family crest in the fretwork of the railing in the hallway, the carving of a phoenix and fog into the transom over the entrance to the study, or the cut glass that beautifully captures the sunlight. Focus on these little details for some extraordinary photos.

The first church in Nagoya was established by Father Augustin Tulpin and Shusai Inoue, the first person to spread Catholic doctrine in Nagoya and Gifu. A remodeled samurai residence, the mix of Japanese and Western building styles in this church makes for an unusual atmosphere.

The three connecting white mortar arches contribute to the impressive porch area, and the contrast with the black pillars is particularly worth noting. Also pay attention to the bell reconstructed from one cast in 1890 in Marseille, France, as well as the exquisite Our Lady of Lourdes Virgin Mary statue made from the lava rock of Mt. Fuji.

The construction of this former residence of ceramics exporter Tamesaburo Imoto began at the end of the Taisho era and was completed at the beginning of the Showa era. Remaining on a large plot of land are Japanese- and Western-style buildings, eastern and western storehouses, a tea room, and a garden.

The most characteristic feature of the times would have to be the remarkable stained glass. A particularly beautiful accent is the elegant design of the transom that lets in large amounts of light. Try photographing it while thinking about the interplay of sunlight and shadows.

Near the Futaba Museum, stop for a short visit at a popular Japanese café. Here you can experience Nagoya's morning service, a Nagoya-style breakfast provided free of charge when you order a drink in the morning hours. Choose from toast, onigiri rice balls, or chilled rice porridge, and add on a salad and savory steamed egg custard for an additional 380 yen (plus tax). Sweet menu items such as the Shiratama Wa Parfait with rice-flour dumplings are also popular. On days with nice weather you can enjoy your teatime out on the terrace.

Built in 1922 as the Nagoya Court of Appeals and Ward Courthouse, this building has a long history as the center of Nagoya's administration of justice. Here you can see a reproduced courtroom or the confinement cells used to hold prisoners. The marble central staircase and restored conference room are especially famous, having been used for many movies and dramas, and even for cosplay or wedding photoshoots.

The exterior, the central staircase, and the restored conference room of this designated Important Cultural Property are all amazingly beautiful. Gorgeous from any angle, taking pictures from the front of the building is a must. When taking a photo of a room with people in it, use the light from the windows for soft, natural lighting. In the spring, you can also enjoy the sight of cherry blossoms.