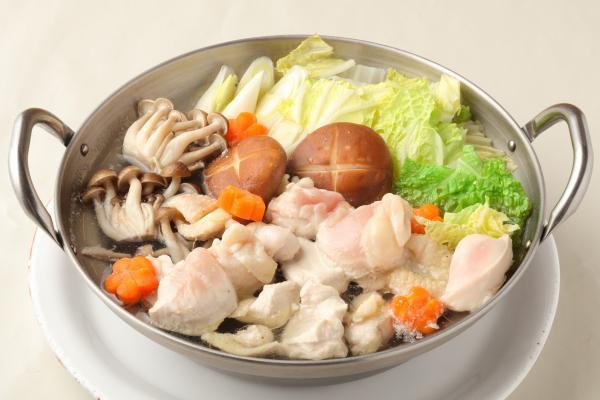 Nagoya Cochin variety of chicken was produced at the beginning of the Meiji Era by crossing a buff Cochin breed imported from China and the native breed of Owari (now the western part of Aichi Prefecture). The reddish brown plumage, which is like colored leaves of the kashiwa oak, is said to be the origin of the local appellation for chicken meat "kashiwa". The reddish meat is rich in flavor, has good chewing texture, and can be cooked in a variety of ways -sukiyaki-style chicken called hikizuri, hotpot, broiled with salt, fried with seafood, marbled, blanched and seasoned with wasabi horseradish, among others. But, of course, Nagoya people eat chicken other than Nagoya Cochin as well. Nagoya Cochin is a special treat even for Nagoya residents. Strictly speaking, Nagoya Cochin means the Nagoya breed chicken stipulated by the Poultry Farming Promotion Law, and the registered trade name of "Junkei (pure-breed) Nagoya Cochin" is the appellation allowed only for meat and eggs of Nagoya Cochin chicken produced in Nagoya and its vicinities by the members of the Nagoya Cochin Association using the breeding hens provided by the chicken farm of the Aichi Prefectural General Stockbreeding Center. Nagoya Cochin chicken is branded as a chicken breed that is good for both eggs and meat, which lays many eggs and whose meat is tasty as well, and which is now nationally known as a premier food brand.